After Gujarat, Rajasthan govt inks MoU with Sadhguru’s Isha Outreach to ‘save soil’

The Rajasthan government has signed a Memorandum of Understanding (MoU) with Sadhguru’s Isha Outreach to save soil “by halting and reversing desertification of fertile lands in the state”. With this, Rajasthan has become the second Indian state after Gujarat to ink such an MoU with the foundation. 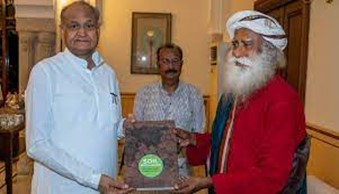 The Isha Foundation, founded by Sadhguru, said in its media release, “The Agriculture Minister and Sadhguru in a public event in Jaipur exchanged the signed MoUs committing to saving the state’s soils by formulating farmer and soil-friendly agricultural policies. Sadhguru later met Rajasthan Chief Minister Shri Ashok Gehlot and handed him the Soil Revitalisation Handbook.”