Union Finance Minister Nirmala Sitharaman filed her nomination for the Rajya Sabha election scheduled to be held on June 10, in Bengaluru Tuesday. 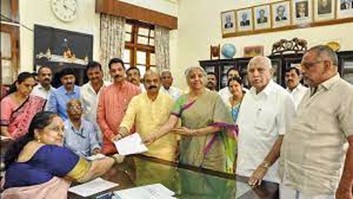 Kannada film comedian S Jaggesh, who is from the dominant Vokkaliga community, has also filed a nomination for Rajya Sabha from Karnataka in the elections to be held on June 10.